Fascinating article on the rise of the graphic novel and how they developed from comic books. Via h20boro lib blog.

"So, why is this rebirth of the serious graphic novel different? Because this new wave arrives when the ascendancy of the image — presciently described by George Steiner, in 1971, in his book In Bluebeard’s Castle — has begun to dwarf the power of the word. The visual arts are booming. The screen fills our lives through television, cinema and computers. Thanks to computers, even when we are obliged to read words, we expect them to be arranged in helpful modules, with plenty of graphics. The computer normalises the graphic novel as a form. The graphical user interface may one day be seen as the most important invention of our time. Through such devices, the imperial image reigns and is, more successfully than ever before, invading the book."
Posted by bc at 3/25/2007 No comments:

From Pitchfork: Video: U of Arizona Marching Band Covers Radiohead: "Our personal favorite piece of footage is culled from the middle of the band's performance. It begins with all 250 students chanting 'Fitter Happier', and from there kicks into a booming, brassy 'Optimistic'. This rolls straight into 'The National Anthem', which features a couple of impressive, range-pushing trumpet solos."
My alma mater's marching band covers my favorite band.
Posted by bc at 3/13/2007 No comments:

Salon Expo Attendees: Keep Your Chemicals Off Our Towels! 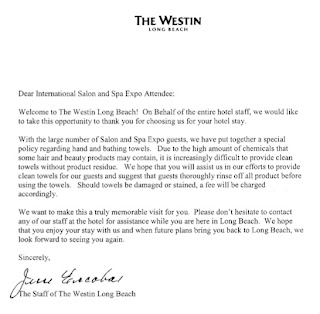 Last month I stayed at the Westin in Long Bench while on a businesses trip. I happened to be there at the same time as the International Salon and Spa Expo.

I noticed a stack of letters at the front desk intended for the expo attendees, and took a copy for myself. From the letter:

"With the large number of Salon and Spa Expo guests, we have put together a special policy regarding hand and bathing towels. Due to the high amount of chemicals some hair and beauty products may contain, it is increasingly difficult to provide clean towels without product residue. We hope that you will assist us in our efforts to provide clean towels for our guests and suggest that guests throughly rinse off all product before using the towels. Should towels be damaged our stained, a fee will be charged accordingly."
Posted by bc at 3/08/2007 No comments:

Email ThisBlogThis!Share to TwitterShare to FacebookShare to Pinterest
Labels: interesting

Chinese hackers attack 'anything and everything'

Scary article on the Chinese government's attacks on our military's computer networks: FCW.com - Cyber officials: Chinese hackers attack 'anything and everything': "Attacks coming from China, probably with government support, far outstrip other attackers in terms of volume, proficiency and sophistication, said a senior Netwarcom official, who spoke to reporters on background Feb 12. The conflict has reached the level of a campaign-style, force-on-force engagement, he said."
Posted by bc at 3/08/2007 No comments:

Word of the Day
Free content provided by The Free Dictionary