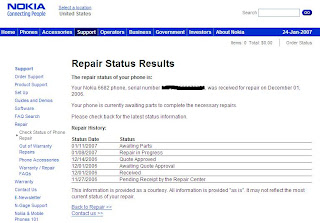 I have had, frankly, a horrible experience over last two months with Nokia's repair center. I had to send my phone in after I bricked it in my I attempt to update the firmware, even though I was using the official installer from Nokia.

The firmware update died partway through, leaving my phone completely dead (lesson 1). Wouldn't even power on. I will take the blame for damaging my phone - I know there is always a risk when updating firmware of bricking a device, even though I have successfully updated firmware on other devices, including computers and routers, and never had a problem.

I tried everything I could to try to bring my phone back to life, but nothing worked. So I did the only thing I could - send it in for repair. Luckily I had kept my old 6590i phone (lesson 2), so I still had a working cell phone.

I sent it in on November 27th of last year, via second day shipping. Then I dutifully checked my phone's repair status on Nokia's web site every day, to see if they had received my phone and had a quote for the repairs. I did this for almost two weeks, and each day there was same status results:

This seemed like an awfully long time for them to receive my phone. So finally I called them (lesson 3) on December 7th, and they informed me that it would be $100 to repair my phone and I should have it within 10 days. I authorized the repair and waited.

Again, I checked the web site, every day, but no change in status. Finally I called them again about a week later, and they told me that the turn around time on phone repairs was approximately ten days and I should be getting it soon.

Soon after that phone call, my phone's status was updated:

I thought the date was strange, since I had already approved the quote by phone on the 7th, but the 14th was also the day they also charged my card, so I guess it took them a week to actually get around to approving the quote on their end.

Again, I waited and checked the status page every day, but no new status. On December 27th I then called the repair center again, and I was told that, "yes my repair seems to be taking too long", so I was transferred to "Repair Escalation". I explained to the person I was transferred to my situation again, he then transferred me to someone else, who was not in, so I left a detailed message on that person's voice mail, asking him to call me back. (I think that most of the repair staff was out of the office for the holidays that week.)

I waited a few more days, but no call back and no change in the online status. I then sent Nokia an email explaining how I called them and repair escalation never called me back. I received an email response three days later, which told me to call the repair escalation center (lesson 4).

I called the repair center again, they gave me the updated status, which then also appeared on their web site shortly after my call:

So now it appears that it has taken Nokia over three weeks to start the repair of my phone after they approved the quote, four weeks after I gave them my credit card over the phone to pay for the repair.

Then a few days later, a new status on the web site:

This appeared to be a good sign - at least something was happening.

I wait another two weeks, but no change in status. I then call them back. This time I am told that my phone can't be fixed, and they were waiting for a replacement phone. They had no idea when my replacement phone would arrive, and offered to refund the $100 I paid for the repair.

After a quick check on eBay, I realize I can get a used Nokia 6682 for about what I paid for the repair. I call them back, and tell them to refund my money.

I now have my replacement phone from eBay, it works fine, same firmware version as my original phone; but I won't be upgrading the firmware on this phone.

In fairness to Nokia, my calls to them were always answered quickly and politely, and my money was refunded promptly. I don't think the problems I had with Nokia could be blamed on the reps answering the phones; there seems to be larger problem with communication and workflow at the repair center.

Since I am both a Cingular customer as well as a very happy Apple iPod customer, I am planning to get the iPhone when it comes out in June. My wife has already switched from her Nokia to Motorola Razr; I doubt our family will ever purchase another Nokia product.

Email ThisBlogThis!Share to TwitterShare to FacebookShare to Pinterest
Labels: tech

Word of the Day
Free content provided by The Free Dictionary